I have a confession: I did 20.4 three times. This is entirely out of character. It seems in direct contrast with what I’ve been preaching since the doors of CrossFit Webster opened in May. If the culture and focus of our programming is based on the concept of sustainable fitness, why on Earth would I subject myself to the same grueling workout on three out of four days? For Science, of course! I’ll explain shortly. First, a glimpse at the workout itself: 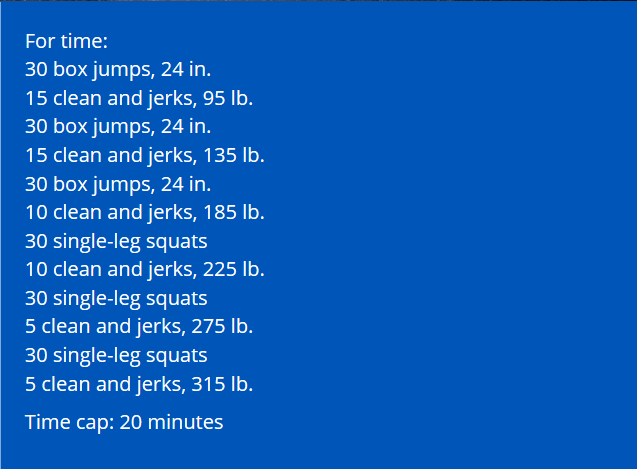 If you know me, you know that pacing is still very much a work in progress. I tend to come out of the gate WAY too hot during workouts, and often end up burning out very quickly. It is my kryptonite. In most workouts, the problem is not ability. In fact, If I was to make a list of movements that I think I’m above average at, Olympic Lifting (the Snatch, and the Clean and Jerk) and box jumps would be at the top of that list. So for 20.4, with the right mindset and strategy it’s safe to say this workout was setting up great for your pal Robert. I was feeling ‘prettay, prettay good.’

‘Slow down and control your breathing. You got this.’

Through discussion with friends, I realized that there were several ways people were approaching this workout, particularly when it comes to the Box Jumps. Some would jump up and step down. Some would ‘cycle’ their box jumps (jump up and jump down). Others decided that step ups were the way to go. I walked away from each conversation under the impression that their approach to the workout might be the way to go. I had an epiphany.

‘What if I were to test several strategies and see which works best for me?’

This would be a valuable exercise, and a potential moment of self-realization. If anyone needs practice with sticking to a strategy, it’s me. It also wouldn’t hurt if I could spare our members the trouble of second guessing their approach to this week’s workout (and future workouts as well) if I did it right. So, what’s the plan?

As I said, I made three separate attempts at this workout. On Friday, Sunday, and Monday. Three times in four days. Each had a different approach. We’re going to cover each attempt in several ways:
– What was the approach to this attempt?
– What happened during the workout?
– How I felt right when I finished
– How I felt later that day
– What did my body feel like the next day?
Here are the results of each attempt, complete with the split times for completion of each set of box jumps or pistols.

Attempt 1 – Friday
The first attempt was an exercise in pacing (pun intended). As I mentioned, I consider box jumps to be one of the movements that I’m best at. The goal for this attempt was to ‘cycle’ the box jumps (no step down), with a brief pause and a breath at the top of each jump. Additionally, my observation of the morning classes had presented the idea that step ups and pistols were too similar. My hypothesis was the two movements together would fatigue my quads and render them ineffective for pistols. I had not done pistols in quite some time and was not very confident in my ability to do moderate-to-high levels of pistols to begin with.

First, I felt strong with the lifts. Broke the first set ‘6-6-3’ and switched to single reps in the second round. While they certainly slowed down over time, each rep felt solid and I felt confident in my ability to complete a rep or two at 275 pounds – If I got there. The box jumps went as planned. I took some time at the top of each rep. I even switched out my shoes for lifters when it was time for pistols. That gave me an extra 30-45 seconds to control my heart rate. The reps at 225 were SLOW. They took 5:52 (a rep every 45 seconds or so) and left me with about one minute to do pistols. I got 15 pistols, which left me with a score of 185. I was content, and only slightly disappointed that I did not get an attempt at 275 lbs.
After the workout was over, I had one thought, and one thought only: HOLY QUADS! All that B.S. two paragraphs ago about saving my quads didn’t make a difference, at all! My legs were pumped, I could see several veins, and climbing the 5 steps to the lounge in the gym was a struggle. I could feel my legs shaking when I set up for the last two lifts, and that feeling continued well into the night. I was certainly looking forward to a much-needed rest day.

Attempt 2 – Sunday
If Friday was an exercise in pacing, Sunday was the complete opposite. I sold out. Sunday was the day I decided I was going to move as fast as I could through each of the movements – F the world. We could call this one the classic Rob workout, circa 2016. First set of box jumps? 46 seconds. First set of Clean and Jerks? Unbroken. ‘Get back on the box.’ It went well, for about three to four minutes before the wheels fell off. Look at the split times above. it got ugly, fast.
One tricky part of this workout is navigating that second set of Clean and Jerks. For men, the weight was 135 pounds. 15 reps at that weight amounts to half of the CrossFit benchmark workout, ‘Grace.’ I haven’t tested in a while. In 2017, I completed ‘Grace’ in 1:47 (again, barbells are ‘my jam’). In the middle of the workout, however, those 15 reps punched me squarely in the face. I was toast for the remainder of the workout. The split coming out of the following box jumps was atrocious in comparison to Friday, and I gave up. Kind of. I stood with my hands on my knees for about a minute (maybe more). It was bad. The reps at 185 pounds felt like 225 did during the previous attempt, and the 10 reps at 225 took over six and a half minutes!
After the workout, I was angry. Angry at myself, and the absurd premise for the workout I just ‘completed.’ I was wiped out. I felt defeated. I went home immediately, watched football, and took a nap.
While there were certainly other factors at play (beer and chicken wings for lunch, a whiskey or 3 with friends after dinner), it’s safe to say this was a ridiculous strategy and an ill-advised attempt at competitive fitness. We’re going to pretend this didn’t happen.

Attempt 3 – Monday
Twenty-Seven hours later, I was back at it. This time, I had another plan: Step Ups. In discussion with friends, I found that several of them had success with doing step ups, and I arrived at the gym with guarded excitement. ‘You couldn’t do any worse than yesterday, you fool.’ Warming up was a dose of reality: it took a long time and felt about as terrible as you’d expect after putting your body through the ringer twice in three days. The warmup lifts all felt heavy. I felt slow, immobile, and struggled to find a groove with technique. After about 45 minutes, it was time to retest.
The workout itself went fantastically. Stepping up on the box allowed me to manage my heart rate much more efficiently than the box jumps did. As a result, the lifts felt great in comparison to Sunday. Additionally, my tie breaker time coming out of the first set of pistols was 30 seconds faster than Friday’s attempt, and a full minute faster than Sunday’s debacle. It was the best score of the three attempts. Admittedly, it left me annoyed at what could’ve been. Now it’s the day after, and I am sore. Very sore. Very very sore, even.

I have no doubt I would’ve hit a couple of reps at 275 pounds had I done step ups on Friday. I was fresh and felt strong. I also know I would have done better on Monday had I not gone for broke on Sunday. The cumulative fatigue took its toll. Now that I’m armed with the proper approach, I am looking forward to hitting this one again in the future.
Here are a couple more key points:

1) Intensity and its impact on the body: There is no other way to put it. My body is wrecked. Every muscle in my back, my traps, and my quads are screaming! I’ve got a tight shoulder, my knees feel swollen, and my thumbs are bruised from all the hook grip. Given the circumstances, this is normal soreness and will subside in a couple of days. It’s a dose of reality as well. Working the same movement patterns that hard consecutively is the recipe for overuse or injury. I’ve covered this in previous posts – Injury won’t usually occur over one specific weekend. It will typically take its toll over longer periods of time. It speaks to responsible programming and taking a mindful approach to training. Over the next few days, I expect to take my foot off the gas, make sure to keep moving, and work some stretching and mobility work into my training to compensate.

2) Strategy: Moving as fast as I could did not work. Both attempts with a plan went better than the one at maximum intensity. Too often in our training, we don’t take the time to think through a workout before we attempt it. What is the intended stimulus? How should I break up the reps? What is the proper loading? In the case of 20.4, as the workout moved along, it became increasingly clear that step ups were the right approach. Looking at the split times, by the time I got through the first set of pistols, I was ahead of the pace in the two previous attempts. If you’re not thinking through a workout before you approach it, you’re shortchanging yourself.

3) Fatigue – specifically movement pattern vs. muscle fatigue: Box Jumps and Clean and Jerks both take a tremendous amount of explosive opening of your hips. The extension of your hips is imperative to completion of the rep (getting the bar to your shoulders or getting up on top of the box). It’s not surprising that the attempt that involved less fatigue of that pattern was the best score of the three. I was able to move through the last set of Clean and Jerks the fastest during the third attempt – despite feeling the most beat up prior to starting. In each case, my quads were similarly fatigued. The box jump vs step up debate made no difference. Cumulative fatigue is no joke, however. Even though I was moving faster on the lifts because my heart rate was lower, each rep felt much heavier than they did on Friday. Again, had I strategized properly on Friday, I probably wouldn’t have attempted this workout three times. It would’ve robbed the world of this post, but I digress. I am still somewhat frustrated that I wasn’t able to hit any reps at 275 pounds, sometimes a little perspective is needed. I finished 20.4 in the 92nd percentile world wide – 2006th place (for the 35-39 Age group, of course #oldmanstrength) out of over 27,000 men!

Of the three, the best attempt was clearly the one that allowed me to control my heart rate and keep moving. Coming out of the gate in high gear is usually a recipe for disaster – as evidenced by attempt two. I’ve always understood this conceptually. Having empirical data to support this should help keep it top of mind for next week and beyond. Additionally, it’s reassuring to know that a mindful approach was the key to success, even for the CrossFit Open.